You are here: Home  /  informarmy.net  /  Ubuntu and the ASUS P5Q-E Motherboard
Stampa / Print 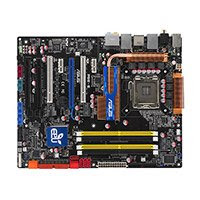 I built a brand new PC a few weeks ago, and getting my ASUS P5Q-E motherboard to work in Linux took a few tweaks. I had taken my harddrive out of my old PC and dropped it right into the new PC, expecting it to work. Ubuntu managed to start booting, but it hanged at the earliest bootup splash screen, where the progress bar bounces back and forth. GRUB had managed to boot the kernel image, but something was wrong – The kernel image couldn’t find my hard disks, so it wasn’t booting.

To solve this problem, I had to change the following BIOS options:

Hopefully someone finds this useful. When I first booted and Ubuntu didn’t boot, I thought to myself, “Damn, I should have checked if this new Intel chipset has good support in the kernel”. I was worried the motherboard just wasn’t going to work. However, after tweaking those BIOS options, things are working fine. +1 for Linux.