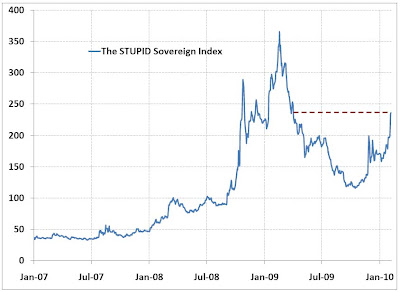 7 US States That Are Worse Off Than Greece, Portgal, Ireland, And Spain
Gregor MacDonald
The inevitable coming of the sovereign debt panic finally engulfed Europe this week as the derisively (or perhaps affectionately) named PIGS spilled their slop on the continent. But Portugal, Ireland, Greece, and Spain are hardly worthy of so much attention. In truth, they are little more than the currently favored proxies among the leveraged speculator community (cough) for the larger problem of all sovereign debt. Indeed, the credit default swaps on these smaller European satellite states were not alone this week in making large moves higher. UK sovereign risk rose strongly, and so did US sovereign risk. With a downgrade warning from Moody’s to boot.

Notable among three of the PIGS are their relatively small populations, and small contributions to either world or European GDP. While Spain has a population over 45 million, Portugal and Greece have populations roughly equal to a US state, such as Ohio–at around 10 million. And Ireland? The Emerald Isle has a population similar to Kentucky, at around 4 million. While the PIGS are without question a problem for Europe, whatever problems they present for Brussels are easily matched by the looming headache for Washington that’s coming from large, US states such as California, Florida, Illinois, Ohio, and Michigan.

I’ve identified seven large US states by four criteria that are sure to cause trouble for Washington’s political class at least for the next 3 years, through the 2012 elections. These are states with big populations, very high rates of unemployment, and which have already had to borrow big to pay unemployment claims. In addition, as a kind of Gregor.us kicker, I’ve thrown in a fourth criteria to identify those states that are large net importers of energy. Because the step change to higher energy prices played, and continues to play, such a large role in the developed world’s financial crisis it’s instructive to identify those US states that will struggle for years against the rising tide of higher energy costs.

First, let’s consider a large state that didn’t make my list. Texas didn’t make the list because its unemployment rate has not risen high enough to reach my cutoff: a state must register broad, U-6 underemployment above 15%, and currently Texas has only reached 13.7% on that measure. Also, Texas’s total energy production nearly perfectly matches its total energy consumption. Of course, Texas has indeed had to borrow more than billion dollars so far to pay unemployment claims, thus technically bankrupting its unemployment trust fund. That meets my criteria. But, it’s instructive to note Texas’ energy production capacity in this regard, as that produces dollars. And one of the big reasons US states are under so much pressure, like their European counterparts, is that they cannot print currency. Being able to produce oil and gas is the next best thing to printing currency. So, Texas doesn’t make my list.

The seven states to make my list are California, Florida, Illinois, Ohio, Michigan, North Carolina, and New Jersey. Each has a population above 8 million people. Each has had to borrow more than a billion dollars, so far, to pay claims out of their now bankrupt unemployment insurance fund. Also, each state currently registers broad, underemployment above 15% as indicated by the U-6 measure for the States. And finally, each state is a large net importer of either oil, natural gas, electricity, or all three of these energy sources.

Let’s consider the overall predicament for residents of states like California, with its epic housing bust, Ohio and Michigan at the end of the automobile era, or North Carolina and New Jersey in light of the financial sector’s demise. Not only have states such as these permanently lost key sectors that once drove their economies, but, residents in these states are over-exposed to structurally higher energy costs. The prospect for wage growth in the United States is now dim. We are already recording year over year wage decreases in real terms. The culprit? Energy and food costs. My seven states are squeezed hard at both ends: no wage growth at the top, and no relief through cheaper energy costs at the bottom.

US wage growth in real terms has been stagnant for years. And the most recent decade of higher oil prices has been particularly punishing to states over-leveraged to the automobile like California, Florida, and North Carolina where highway and road systems dwarf public transport. While it’s true that states like Ohio and California produce some oil and gas, the size of their populations overwhelm any production with outsized demand for electricity and gasoline. In contrast, and as I mentioned, it will be revealing to see how this depression ultimately plays out in such states as Colorado, New Mexico, Wyoming, Oklahoma, North Dakota, and Louisiana which are all net exporters of energy.

Were it not for peak oil, gasoline prices would have fallen to a dollar during this depression as oil returned to the lows of the late 1990’s–if not even lower. Petrol at 90 cents a gallon would begin to chip away at the painfully decreasing spread between punk wages and energy input costs, currently endured by underemployed Americans. Natural gas and coal prices are also much higher than they were at the lows of the 1990’s. And I need not remind: while energy prices are very 2010, the American workforce has lost so many jobs that our labor force has indeed returned the 1990’s.

21st century energy prices overlaid on a 20th century economy? That’s no fun at all. The mainstream economics profession, perhaps unsurprisingly, still does not pay enough attention to the interweaving of long-term stagnant wage growth, higher energy inputs, and the resulting credit creation that OECD countries took as the solution to resolve that squeeze. Given that one of out of eight Americans takes food stamps, a visit to states like Illinois, Florida, Ohio, and North Carolina would reveal that the difference between 15 dollar oil and 75 dollar oil, and 2 dollar natural gas and 5 dollar natural gas is large.

My seven states of energy debt represent a full 35% of the total US population. As with other US states, they face looming policy clashes between protected state and city workers on one hand, and the growing ranks of the private economy’s underemployed on the other. The recent circus at the LA City Council meeting was a nice foreshadowing that the days of unlimited borrowing by governments–against future growth based on cheap energy–is coming to an end. Washington can print up dollars and fund these states for years, if it so chooses. But just as with the 70 million people in Portugal, Italy, Greece and Spain, the 108 million people in these seven large states are probably facing even higher levels of unemployment as austerity measures finally slam into their cashless coffers, and reduce their ability to borrow.