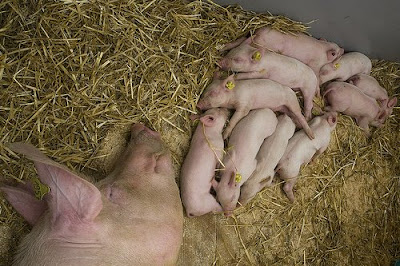 As infections near 100,000, the novel flu strain, which has killed over 400 people in more than 130 countries and territories, may have already taken an economic toll. Worldwide, gross domestic product could be slashed by as much as US$2.5 trillion at the six-month mark in October, U.K.-based Oxford Economics said in a recent report. That works out to 3.5% of projected global 2009 GDP, it said. Health experts warn that a second wave of swine flu would likely hit the Northern Hemisphere during the flu-prone winter months. On Thursday, the U.S. said that it is pushing ahead with plans for a government-funded vaccination campaign amid concerns the pandemic will intensify in the autumn. “A flu outbreak in the autumn would hit the world economy just as it starts to recover from the credit crunch,” the Oxford report said. “It would prolong the rise in inflation, threaten already fragile businesses and put further strains on financial markets and fiscal balances. This could generate a vicious cycle that postpones the recovery for another couple of years.” “Another factor that makes a worse scenario quite likely is the fact that the pandemic would occur around Christmas, when a lot of discretionary spending takes place,” it said. “Different industries would be affected differently. Those selling nonessential goods and services would probably be hardest hit,” the report said. Oxford Economics is the commercial arm of Oxford University”s business school. Healthwise, the World Health Organization says that developed countries are well equipped to combat the swine flu. The main worry: that the virus may mutate into a more lethal strain, and that developing countries with poor health infrastructure will find themselves ill-equipped to fight it. “Our real concern is the developing countries which have very poor public health infrastructure and will be at the back of the queue when it comes to vaccines,” said the WHO”s Asia-Pacific regional spokesman, Peter Cordingley. The Philippines, one of the hardest-hit nations in Asia, has asked for as much as 80% of its entire Health Department”s budget to combat swine flu. Swine flu”s destructive potential, rather than its destructive reality, lay behind the World Health Organization”s June 11 decision to declare it a global pandemic. “Many developing countries actually go into this pandemic what I call empty-handed,” WHO chief Margaret Chan said at a donor”s conference in Geneva earlier this week. “They don”t have antivirals. They don”t have vaccines. They don”t have antibiotics.” U.N. secretary general Ban Ki-moon has asked for $1 billion to battle the virus. The original Type A virus, the 1918-9 Spanish Flu, has long represented a nightmare scenario for epidemiologists. The early 20th century flu outbreak killed some 50 million people and proved lethal to otherwise healthy young adults. In 1918, neither penicillin nor antibiotics had yet been discovered, vaccines were rarely used and comprehensive public health infrastructure didn”t exist. “There”s no resistance to it, it”s a completely new virus,” Cordingley said of swine flu. “We do expect the numbers to explode. It”s hardly started.”